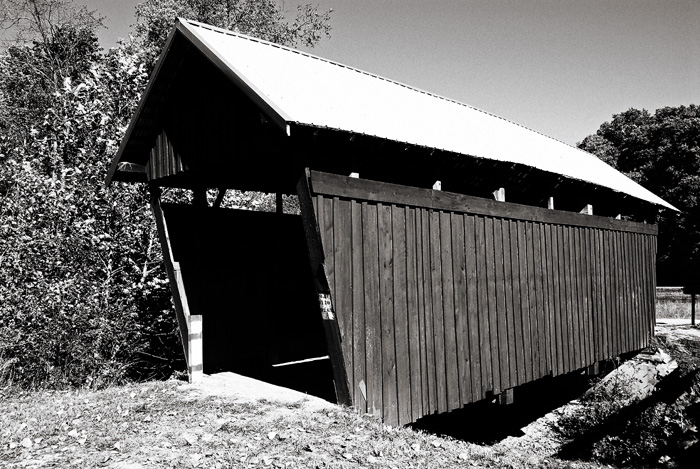 The Cox Covered Bridge was built in 1884 by the Diltz and Steel Company and uses a variation of the Vinton County Queenpost truss system. Built for a very utilitarian purpose, covered bridges were masterpieces of engineering – but horse and buggy America called them “kissing bridges.” Their dark interiors proved ideal for what a later generation was to refer to as “spooning.” It was also common for lovers to steal kisses in the backs of buggies as they passed through the darkness of the bridge, the slower the horses (and the longer the bridge) the better. Apparently, drive-in movies weren’t yet available. As a result of these questionable extracurricular activities, covered bridges actually received public condemnation by concerned local ministers. They were called wishing bridges too, for everyone knows that a wish made in a covered bridge comes true. Wooden bridges tended to deteriorate rapidly from exposure to the elements, having a useful lifespan of only nine years. Covering them protected their structural members, thus extending their life to 80 years or more. Covered bridges were also constructed to be used by travelers during storms and inclement weather.