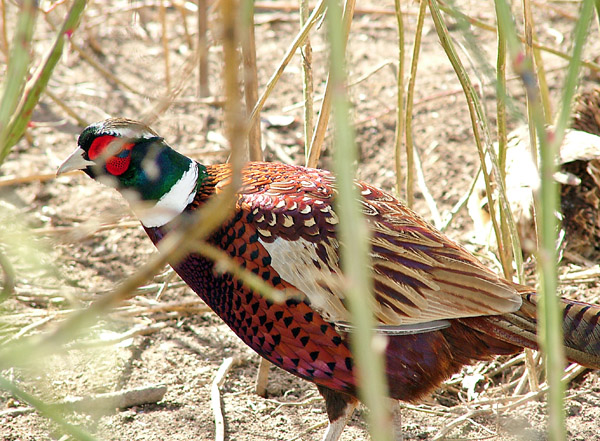 In 1882, thirty ring-necked pheasants were shipped from Shanghai, China to Portland, Oregon. By 1892, they had multiplied enough that Oregon started a hunting season the same year. On opening day, 50,000 pheasants were killed. Other states began to quickly import pheasants themselves. The first ring-necked pheasants were introduced in Ohio in 1896, but were not originally successful.<p>The male pheasant is colorful with a dark, somewhat irridescent head; red patches around the eyes, white neck ring; and brown, speckled body feathers. The female has just the brown, speckled feathers, which is perfect camouflage when nesting on the ground. When startled, they take off from the ground with wing beats reaching three times per second.

Ready for my close up, Mr. DemilleRusty, Trusty Tractor